What Drugs Will Disqualify You from Operating a CMV? 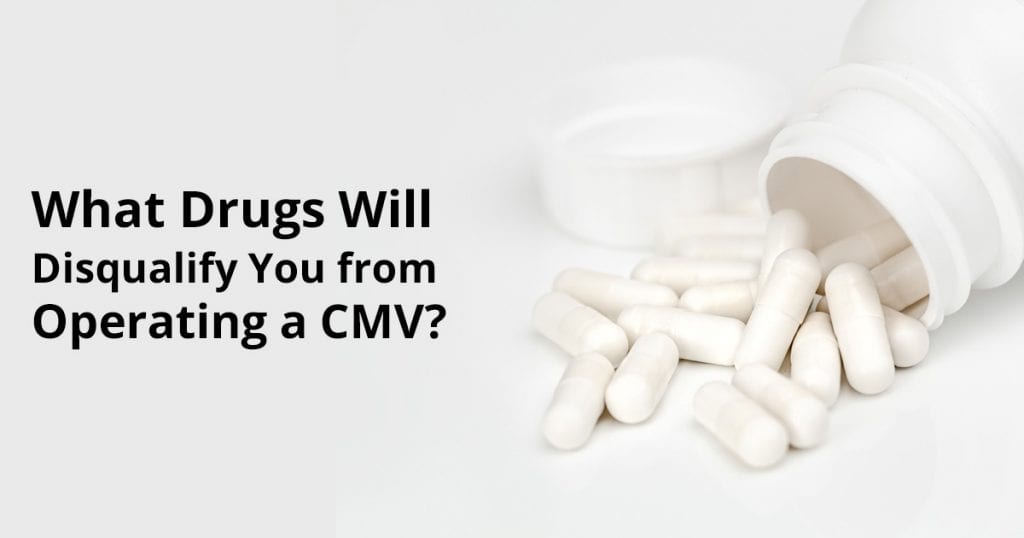 What Drugs Will Disqualify You from Operating a CMV?

One question that comes up frequently on the blog is about the use of medications by CDL drivers – and whether a particular drug will disqualify a driver from getting behind the wheel.

Drivers who are required to be enrolled in a DOT drug and alcohol testing program will be tested during the pre-employment process – and then periodically thereafter – for the following substances:

It probably goes without saying that a positive test result for any illegal substances on the above list – or a prescription medication that wasn’t prescribed to you by a medical doctor – will result in a positive test result. However, even though all of the drugs on the Opioid panel are legal when used under the care of a physician, they are considered disqualifying by the DOT because of their ability to impair reaction time and focus. Even with a valid prescription, your drug results will likely be marked “Negative with Safety Concern” by the MRO, who will defer to your employer (and likely your prescribing physician) regarding your safe ability to drive.

Drug Use and the DOT Physical

Your drug use will come up again during the DOT physical process, which occurs every two years for most drivers. At the beginning of your examination, you will be required to disclose all of the medications and supplements you take – whether or not they’ve been prescribed by a doctor. One thing to keep in mind during this process is the DOT disqualifying drugs list which prohibits the use of any narcotic, amphetamine or habit-forming drug by a CMV driver unless the prescribing physician clears the driver for duty and writes a letter to the medical examiner that gives the driver clearance to drive. It’s important to note that the medical examiner can still declare the driver unfit to drive based on their medication usage – they don’t have to follow the advice of the prescribing doctor.

According to the DOT, any driver that takes a controlled substance that is included in 21 CFR 1308.11 (391.42(b)(12)), or other habit-forming drug, is medically unqualified to drive. If you have questions about a particular medication, you can refer to this list to see whether or not you’ll be able to take it while driving. If you do take a medication on this list, you’ll need to get a letter from your doctor that clears you to drive before your next DOT physical.