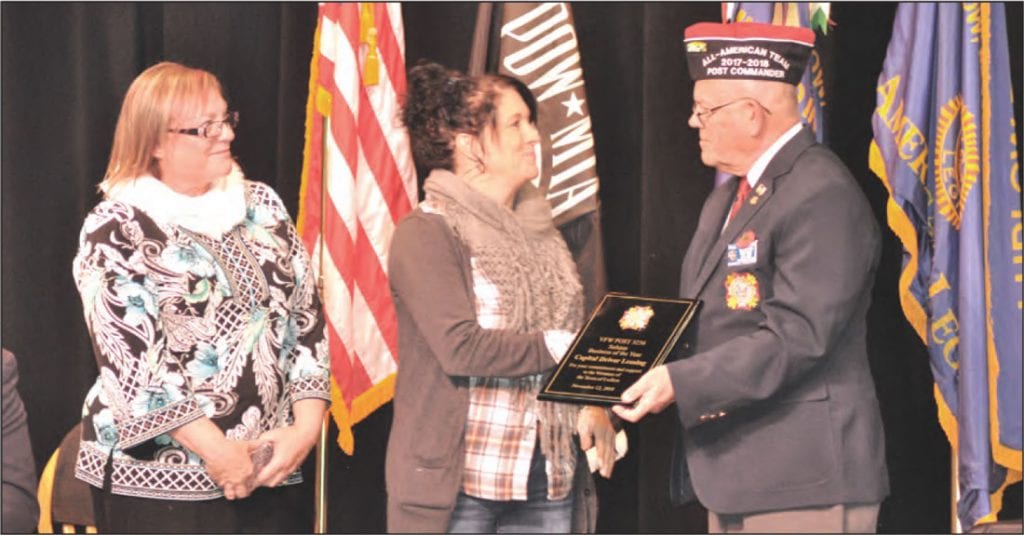 Joshua D. Desforges VFW Post 3236 of Ludlow Commander Paul Chrzan issues a plaque to representatives of Capital Driver Leasing, LLC who were chosen as the business of the year for their contributions including the Wreaths Across America campaign.

LUDLOW – On April 6, 1917, the first American troops arrived on the shores of Europe ready, to throw themselves into the fray of World War 1.

Among the thousands of troops deployed to the battlefield, more than 20,000 members of the National Guard 104th Regiment, 26th Infantry Division, otherwise known as the “Yankee Division,” would be among the first U.S. soldiers to engage in armed combat to defend France from German forces.

A majority of troops hailed from Massachusetts, and the Yankee Division would cement themselves in history the following year in April of 1918 after they spent four days defending the French village of Apremont. The 26th Infantry were regarded as heroes in France and became the first U.S. troops awarded with one of France’s highest military honors, the Croix de Guerre (Cross of War). Decades later the 26th Infantry would receive the Croix de Guerre distinction again for bravery in France during World War II.

A day after the 100-year anniversary of the First World War’s conclusion, on Monday, Nov. 12, veterans adorned in World War I soldier’s uniforms stood front and center on the Exit 7 Theater stage in Ludlow to reenact the historic moment in which the 104th Infantry Division was recognized by French authorites. “The American Troops gave proof not only of their courage, of which we all know, but also of a brotherhood-in-arms which was absolute and ever present,” said Ludlow Veterans Services Agent Eric Segundo.

Following a presentation of colors by Ludlow VFW Post 3236, an invocation was given by Rev. Richard Pagano of St. Paul’s Untied Methodist Church with the Ludlow High School Chorus performing the National Anthem.

The special ceremony commemorating the actions and deeds of the 26th Infantry and the centennial anniversary of the armistice was preceded by remarks given by guest speaker Brian Willette, who chaired the VFW’s Centennial presentation and who serves as the Massachusetts Commander of the Military Order of the Purple Heart.

Board of Selectmen Vice Chairman Derek DeBarge then spoke about his own service in the U.S. Marine Corps.

“It was in the Marine Corps that I learned to put my country before myself,” said DeBarge, who said that doing so meant giving up holidays, special occasions, and important moments with his family.

“Being a veteran to me has always been about country, pride, camaraderie, and the will to lead. But there has always been heartache, loss, loneliness,” said DeBrage who asked his community to always thank veterans.

“Today and everyday we continue to thank and recognize all of our veterans for their sacrifices,” said Lesser, who also saluted Segundo for his many contributions to Ludlow and the community of veterans services.

Lesser said one of the top priorities for legislators was make available the services afforded to veterans and to their families.

Petrolati too emphasized the need for recognizing veterans for their deeds and their sacrifices, opening with a quote from an unknown author that said, “We don’t know them all, but we own them all.”

“Across this great country today, and throughout the world, America will pause to honor our brave fighting men and women who for more than 241 years have underwritten our freedom by their duty, honor, and their selflessness,” said Petrolati.

Local and state officials including Segundo would impart awards along side several military representatives including Willette and VFW Post Commander Paul Chrzan to student participants in the Patriots Pen and Voice of Democracy challenges, to Volunteer of the Year Kara Smith, Business of the Year Capital Driver Leasing, LLC (who helped to begin the Wreaths Across America campaign for Ludlow last year), Organization of the Year the Ludlow Lodge of Elks #2448, and to Ludlow teachers Carrie Joseph and Michelle Annecchiarico for bringing their patriotism into their classrooms.

Among those was Ludlow Veteran of the Year Carlos “Charlie” Santos.

The 100-year-old lifelong Ludlow resident was recognized for his service in U.S. Army during the peak of World War II.

Injured in battle in April of 1944 in Monte Casino, Italy, Santos was told that he would never be able to walk again.

Defying expectations, Santos not only learned walk once more but also returned home to start a family, fathering three children who later gave him seven grandchildren and four great-grandchildren. He also volunteered with the Ludlow Lions Club for 68 years, received the Purple Heart in recognition of his bravery on the field of battle, and earlier this year, received an honorary high school diploma from Ludlow High School. Santos dropped out of high school in his senior year to help support his family and six siblings.

“Charlie’s loyalty, diligence and devotion to duty are in keeping with the highest traditions of military service are reflects great credit upon himself, the town of Ludlow, and the United States Army,” said Segundo.