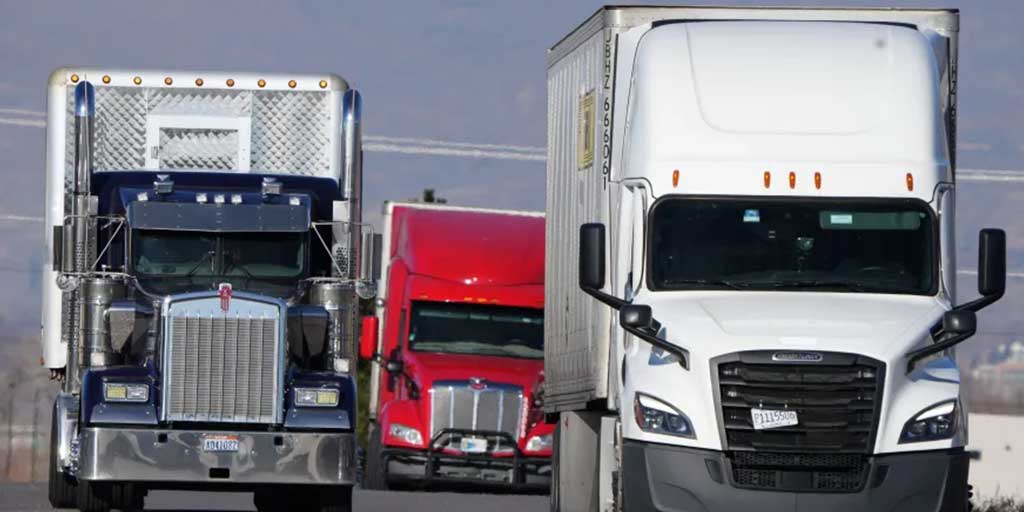 You see them on the road, you see them at truck stops, you might even think driving a big rig seems like fun. After all, who hasn’t imagined cruising the highway in an 18-wheeler while “Born To Be Wild” plays in the background?

The truth is, most of us probably don’t know much about truck drivers and life on the road. It’s a “society within a society,” as one insider described it — complete with its own language and customs.

Here’s what long-haul drivers wish you knew about what they do.

If you happen to find yourself sharing the road with an 18-wheeler, it’s important to remember Newton’s first law of motion — an object in motion stays in motion unless acted upon by an outside force. Heavier objects, including big trucks, take more time to slow down.

A fully loaded semitruck can weigh 20 times more than the average car. Even in ideal conditions, that same truck traveling at 65 MPH can take up to 525 feet to reach a complete stop. That’s nearly the length of two football fields.

So give the long-hauler in front of you some extra space. Just because you can stop on a dime, that does not mean trucks can.

Don’t assume truck drivers can see you, especially if you’re driving on their right side (remember, the left lane is for passing). Commercial trucks have four large blind spots: in the front and rear and on either side.

If you find yourself hanging out on the left or right side of a truck, then chances are you’re in the driver’s blind spot and they don’t like that. It makes changing lanes and predicting behavior nearly impossible, which makes driving more dangerous for everyone.

As a general rule, if you can’t see the driver’s face in their side mirror, they can’t see you.

3 – they have their own lingo

Like all great American subcultures, long-haul truckers have their own language. All of the non-truck drivers on the road? Those are “four wheelers.” And yes, that includes pickup drivers, even those in the souped-up F-150s.

Cops are “bears,” so-called because the hats worn by state troopers resemble the one worn by Smokey the Bear. The lights on top of police cars? Those are “cherries.”

A trucker hauling cars is driving a “parking lot” and weigh stations on the side of the road are called “chicken coops.”

No, truckers aren’t being sent to the principal’s office. In the trucking world, detention is when a driver’s route is delayed either at a drop-off or pick-up location.

Traditionally, the trucking industry defines detention time as any time spent waiting to load or unload longer than two hours. Time spent waiting is time wasted and it’s one of the most frustrating things truckers deal with.

A 2018 report from the DOT Office of Inspector General found detention time costs for-hire truck drivers between $1,281 and $1,534 in earnings each year.

5 – most don’t get paid overtime

Detention time is especially frustrating because most drivers, especially long-haulers, are not paid by the hour and don’t receive overtime for additional hours worked. In fact, many employers are not required to pay overtime because of an exemption that applies to interstate trucking under the Fair Labor Standards Act.

The provision was intended to disincentivize truckers from driving for longer, potentially dangerous, stretches of time, but critics argue it’s just a way for carriers to keep costs down and avoid paying drivers more.

“It’s had the opposite effect. Now, truck drivers still work because of detention but they don’t get paid for that time because they get paid by the mile.” said Norita Taylor, the director of public relations for the Owner-Operator Independent Drivers Association.

WalMart made headlines earlier this month when it announced new drivers could make up to $110,000 in their first year but that’s not the norm in the trucking industry. In fact, pay structures vary widely depending on the carrier.

Unlike most jobs, in which employees are paid a base salary or an hourly rate, many truck drivers are paid by the mile. Under this pay structure, drivers calculate their earnings based on the job’s “CPM,” cents per mile.

Although it’s less common, other drivers are paid per the load, earning a flat rate for each haul they deliver. And drivers who happen to be owner-operators often get paid as a percentage of the load revenue, so the more valuable the load, the more money they make.

As of May 2021, the median pay for a heavy and tractor-trailer truck driver in the U.S. was $48,310, according to the Bureau of Labor Statistics.

For most four wheelers, big trucks are those things that get in the way. They can be stressful to drive next to, they kick up water on your windshield and they’re nearly impossible to pass on two-lane roads.

But those trucks, and the drivers behind them, are the backbone of the American economy. According to the U.S. Census Bureau’s Commodity Flow Survey, trucks transported nearly 72% of the value of all goods shipped in the United States.

It’s a fact some trucker groups are helping kids relate to. The Women In Trucking Association, a nonprofit that encourages women in trucking, even designed a Girl Scout patch program for the transportation industry.

“We want kids to look at the trucks and go, ‘Mommy, daddy, that could be my cookies on there or my milk,’” said Women In Trucking founder and CEO Ellen Voie.

The arm pump. It’s a universal gesture on American interstates that can only mean one thing: honk the horn! It brings joy to children and parents alike.

But do truckers like it when you roll down the window and ask for a toot toot?

“Yeah, keep doing it,” Taylor said. The “trucker salute,” as it’s often called, makes drivers feel acknowledged and appreciated for what they do.

But try not to overdo it, especially in traffic; those horns get loud.