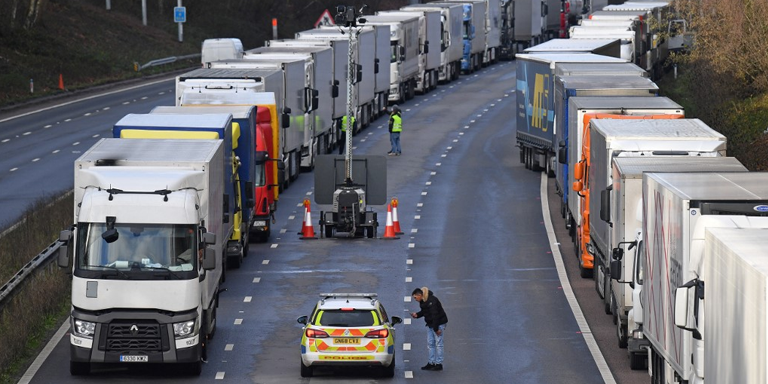 Violence reported at petrol stations; US also heading for crisis

Britain and the United States are both in a logistics crisis as a shortage of truck drivers looms large over the horizons of both the countries.

The UK is already experiencing a disaster as fuel stations have run out of petrol and motorist have come to blows.

According to a spokesperson for the American Trucking Associations, the US would be hit by a shortage of at least 150,000 truck drivers by the end of this year. The number was 60,000 in 2019.

In Britain, the shortage has already hit the 100,000 mark, prompting UK officials to approve plans to bring in as many as 5,000 foreign Heavy Goods Vehicle (HGV) drivers to deal with this shortage.

The problem mainly stems from the fact that new truck drivers were not entering workforces in the UK or the US in sufficient numbers to make up for the retiring workers and replenish their ranks in accordance with the local demand.

However, the BBC has linked the crisis to Brexit and the coronavirus pandemic. Both events have caused a reduction in the number of drivers in the UK.

A recent study found that more than 14 million truck driver job posts were advertised in 2019-20 period in the US alone.

A Canadian company, Skelton Truck Lines has paced up recruitment of women as truck drivers.

Already more than 30% of its drivers are women and the company also offers ‘team freight’, women doing long-haul jobs with their spouses.

In the US, this is not the case. Only 6.6% of the entire trucking industry workforce were women.

Ellen Voie, the CEO of the Women in Trucking Association, says that the women in the trucking workforce often cite safety as their top priority. However, she maintained that safe working conditions and environments benefits everyone.

Across Britain, a dearth of long haulers resulted in the mass closure of fuel stations.

Almost 90% of fuel stations had run out of fuel and the rest of them would be depleted soon.

The shortage aggravated on the heels of Covid-19 as more and more people order everything online from the security of their homes.

Why no one is ready to drive

Gerbeer Singh, the owner of Buttar Transport company in Wyoming, said: “The main thing is there’s no life for the driver. You have all the time stay at the truck.”

Some people who get trained and licensed as truckers ultimately discover that they don’t want to make long-term careers out of the endeavor. However, some recent changes in the industry aim to provide more flexibility, which could reduce turnover rates.

A common complaint by veteran truck drivers was spending most of their waking hours at the wheel.

To rectify this, the US Department of Transportation published new rules that went into effect in September 2020.

One of them is that drivers must take 30-minute breaks after driving for at least eight hours. There is no requirement that they are consecutive hours, and drivers can count periods when they are on duty but not driving while calculating the eight hours.

Having a work/life balance was also more important for women, another study showed, as women ranked it as their third priority, and men chose it as their seventh.