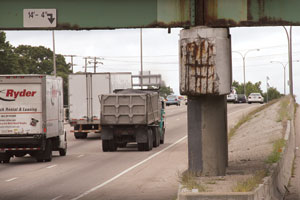 http://www.ttnews.com/articles/petemplate.aspx?storyid=38741 This story appears in the July 6 print edition of Transport Topics. The Rhode Island General Assembly adjourned without approving a controversial truck toll plan offered by the governor, but lawmakers are expected to meet in the fall to continue reviewing the plan, a key state lawmaker said. House Speaker Nicholas Mattiello (D), speaking to reporters June 30, indicated the chamber will likely hold a special session to explore proceeding with the plan, which would require large trucks to pay bridge tolls. Shortly after the General Assembly adjourned, Gov. Gina Raimondo (D) signed into law an $8.7 billion budget that did not include her toll plan. At the signing, the governor reiterated the need to approve a transportation plan that aims to upgrade and repair aging bridges. “I have a proposal before the General Assembly. The Senate showed leadership and passed it,” the governor said. “We need to do something. The General Assembly adjourned without taking action on it, which is disappointing. The problem’s still there. So we have to get together to come up with a plan to fix it.” Christopher Maxwell, CEO of the Rhode Island Trucking Association, told Transport Topics he expects House lawmakers will thoroughly review the Senate-passed plan and choose to proceed with a version that does not hurt the trucking industry. “We applaud and respect Speaker Mattiello for putting the brakes on this and giving it a second look, and allowing the trucking industry to be part of the conversation,” Maxwell said. “To this day, Gov. Raimondo has not reached out to the trucking industry,” he said. “Had Gov. Raimondo called us in, had Gov. Raimondo listened like the speaker of the House, Mr. Mattiello, did, perhaps we would be funding bridges by this time.” At the national level, American Trucking Associations also opposes the plan. “If Rhode Island’s leaders are serious about fixing their infrastructure funding woes they should, first and foremost, stop diverting much of their highway-related revenues to non-transportation projects,” ATA President Bill Graves said in a statement. Under a revised version of the plan that the Senate passed 33-4 last month, the maximum toll rate for trucks to cross the state was reduced to $30 from $50 and the average toll amount was reduced to $3.50 from $6. The plan would offer $13.5 million in tax credits, fuel and property tax rebates to Rhode Island-based truckers and shipping companies. The revenue would be used to repair aging bridges across the state, which ranks among the worst in the country. The House did not act on the plan. Read more at: http://www.ttnews.com/articles/petemplate.aspx?storyid=38741]]>